COVID UPDATE: All restrictions in classes have now been lifted. Students are still required to check in upon entry.

Two hours after I finished teaching an anti-carjacking and road rage seminar in Florida, there was a carjacking incident near where we were.

It was an evening seminar which part of it was indoors working on the fundamentals of the subject with practice of different techniques, especially against armed assaults and threats, and part was outdoors with the cars. We truly had great fun, because no one was run over, it ended successfully. People learned new material, practiced previously known techniques, acquired experience and had fun.

We ended the event at 10 o’clock in the evening. At midnight there was a carjacking incident in that city. How did it happened? very simple – just one phone call and a criminal managed to get a car, some food and money, simply by calling for a pizza delivery guy. The delivery guy was lucky, the criminal put him in the trunk of the car and drove away just to let him go in the nearby city, less than 10 miles away.

I was told by some of our instructors who are Law-Enforcement officers that in the year 2014 in the USA there were around 15,000 carjacking incidents that did not end in homicide. And what about road rage incidents? There are tens of thousands too, most end without much of violence.

You can look at this as 1 of carjacking event every day in every state. Is this a lot?

Well many more people die in car accidents, carjacking or road rage situations, at least 5 times more people than that die from infections in the hospitals, but this seems less interesting for most people. Naturally, because we are KMG instructors, what we do is teach KMG. We don’t teach people regular driving skills (we do teach operational driving as part of the VIP sector) or how to avoid infection if hospitalized J. With this work of ours we contribute to better people’s lives as well as their chances to prevent and survive violent confrontations.

Carjacking is a tool to rob people, kidnap others or even grab a hostage.

In the following pictures, we see an example where an attacker approached, he drew a gun and now he’s is threatening with it, commanding the driver to open the door and get out. The driver feels that he is obliged to the comply and feels that there is no alternative but to get out. He opens the locked door, the aggressor opens it (pic.1) and pulls the driver out (pic2).

The Driver, at the first possible moment and even on the way of getting out, makes the defense against the gun threat. Followed by a counterattack and disarm. Finishing mode is usually very clear, get back to the car and drive away, report to the authorities ASAP.

When I am teaching anti road rage and anti-carjacking, I am working on several lines that are very relevant. First we need to understand the kind of dangers and problems that are common.

In the beginning of the session we clarify and explain about the mode of operation of different attackers, personally, I like to tell “stories” and incidents and experience that our people have had in Israel and abroad, describe and analyze those incidents makes the session more alive and realistic.
Some of the common problems that I bring to the attention of the participants are robbery and carjacking from the outside, where the attacker came close and was threatening with a weapon (like in the pics above); Pulling and dragging a victim from the car while threatened at gun point; attack or a threat with a knife placed at different distances, aimed at different points, commonly to the ribs or throat; attacks through the window, like strikes, chokes, an attempt to pull.; knife stab and more, all when the enemy is outside the car.

There are also problems of another nature; such as when the aggressor manages to enter inside the car. Robbery, carjacking, rape, kidnapping and of course dealing with hitchhikers who can attack from the passenger seat are just some of the common dangers that one may face. 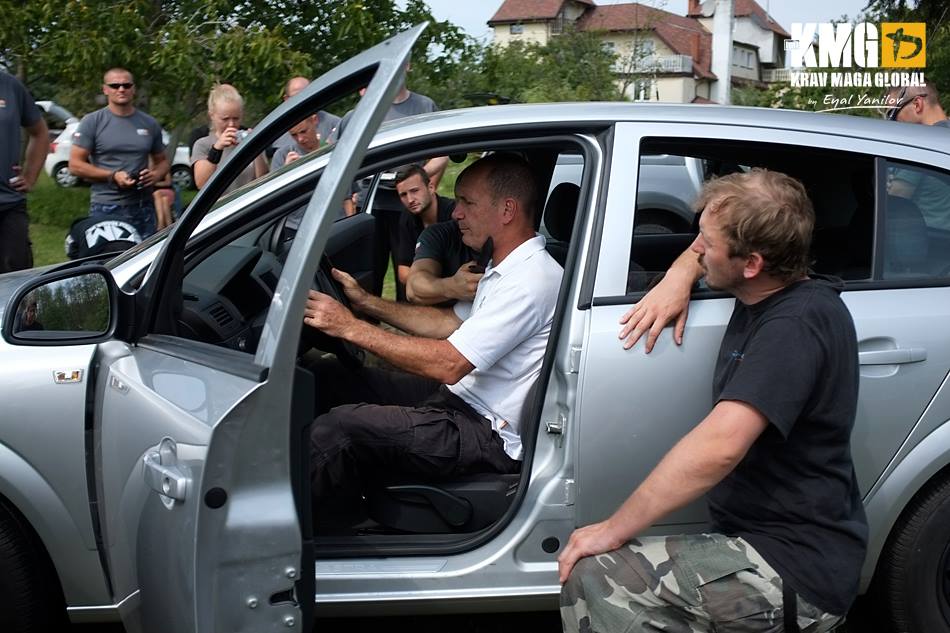 There were times that hitchhiking was very common all around the world and in Israel in particular. Attacking the hitchhiker and attacks of drivers were both common. Several years ago, the Israel Defense Force issued a command that a soldier must not hitchhike unless in very specific places and conditions. This was due to the fact that terrorists used that habit of soldiers, lured them into a car and in most cases killed them.

Another line of problems and solutions is the way deal with an aggressive driver in a carjacking incident or road rage. Problems may be very similar but the nature and background are different. Here one driver is trying to dominate or punish the other driver, his victim. All this aggression is popping up because that driver cut his way or bypassed him, took a parking place or scratched his car with the bumper.
So the aggressive driver gets out from his car, sometimes he takes a tool like a metal bar or a baseball bat from the trunk of his car, and goes to the other car to punish, to attack the other driver or the car.

Naturally it doesn’t matter much what is the background of the conflict, as long as the attacker is trying to damage you, you should do something about it.

First option may still be to drive away. Don’t be tempted to get out from the car if you can remove yourself from the danger zone at the easiest possible moment. Naturally not always it is possible to drive away and the car does not really serve as a good protection, it is rather easy to break a window and reach for the people inside the car.

Due to these facts, we do teach a fast way to get out from the car. This can be used in different situations, including when you have to get out in order to assist someone else.

The technique of fast evacuation of a car includes the way to release the seat belt (see pictures); opening the door and pushing it with the elbow and palm; controlling the door which returns as a result of the push; the way to step out with one leg while the other pushes from the rear; keeping the hands in ready position. To improve this technique of leaving the car at top speed and under stress, we commonly do a competition between the participants from 1 or 2 cars, all trainees-passengers have to leave the car ASAP and the first participant who reaches and hits the target gets a point.

Commonly we start the seminar in a training hall, to cover some basics and align the participants on the relevant techniques and subjects.
Those can be, for example, neutralizing gun and knife threats; defending strikes and grabs while the aggressor is attacking from the side and more. Occasionally we even train while sited in chairs, this is to make the learning process easy, as preparation for the simulations and drills in the cars.

The movement in such condition is easier that in a car and not entirely similar. However, it does give a certain sense and feeling for the conditions and simulations that will later be practiced while sited in the car.

Practice in the car – Here is an example for a technique against a pistol threats. Even the UK and Australian drivers should know what to do, even if they have the steering wheel at the “wrong” side (right).

We include solutions against a threat coming from the side, high to the head or low to the ribs and also against a threat from behind that can be solved in certain conditions. The fact that the car may be on the move can play for the advantage of the defender, as hitting the car’s breaks will send the aggressor and his gun forward and will make the defense easier.

The fact that the driver is wearing a seat belt may limit his movements, especially of the counterattacks.
One has to be aware of it, ready for it and know ways and techniques to overcome this limitation.

When dealing with an attacker with inside the car, we also deal with a passenger at the back seat trying to strike, threat with a knife or a gun, or choke.

In this picture we see the counterattack after a release against a choke from the rear. The preferred release is by two hands, then apply a lock on the palm/wrist. That lock sends the aggressor sideways and enables the defender to move between the chairs and strike him.

Several years ago there were terrorist attacks against taxi drivers. One of the trainees I had in a seminar was attacked earlier by 2 terrorists, one who choked him from behind using a barbed wire, while the other tried to cut him from the side. With no knowledge in KMG, but with fighting spirit, he hit the brakes, insert a hand between the barbed wire and his neck and defended against the knife attacks. Eventually he managed to escape and survived.

In this blog I tried to give a taste for these scenarios and situations, self-defense and personal protection, fighting and VIP protection inside and around the car. This is just a section of the whole subject of functioning against violent confrontations occurring in and around all kind of vehicles, public and private. Including, car, SUV, bus, tram, train, airplane and boat/ship. We take into conditions the characteristics and nature of the vehicle, as well as the situation and surroundings, and then apply the appropriate KMG techniques principles and variations. The specific courses that deal with much depth in the subject of air-marshals or sea-marshals that are practically offered to governmental units, but the courses for KMG in public and private transportation is open for our instructors of all levels.

As this is a wide topic we decided to form a specific instructors’ education for our instructors in this subject of TRAVEL SAFE in public and private transportation/vehicles. It’s about the above and more, techniques and tactics in preventing and dealing with violent confrontation, near, around and inside all kind of public and private vehicles, from a small car to bus, tram and train, and with relevant applications to airplane and passenger ship. We had the first course in Australia and already scheduled some more in other countries.

Kol Tuv and drive save.

Nine of the Dirtiest Self Defence Moves

When the military needs to get down and dirty with the enemy, it usually means a few things have gone wrong. It’s best for the

Practicing defending against a determined attacker

Kids Krav Maga is back and the kids are loving eve

@red_sgskravmaga in his happy place 👌🏻 Worki

@red_sgskravmaga showing us one way to get through