Celebrities That Do Krav Maga

Although Krav Maga has its origins in military training, favoured for its effectiveness in close combat and defence against knife and gun attacks, it has since been refined so that the techniques could be taught to anyone.

In the 1970s, Krav Maga founder Imi Lichtenfeld started the first official Krav Maga school open to civilians in Israel. Since then, the system has spread far and wide, working its way into the mainstream martial arts culture in the Western world and beyond. Part of this mass recognition of Krav Maga has come from some extremely high profile endorsements from celebrities that effectively propelled it into the spotlight.

Hollywood in particular has been raving about Krav Maga with actors and stage combat directors choosing it as an extremely realistic training platform that almost anyone can use, and for its incredible fitness benefits. Here are some celebrities that use Krav Maga.

Krav Maga has been favoured for stage combat and fitness training in Hollywood for over a decade now. Here are some high profile proponents and celebrities that use Krav Maga. 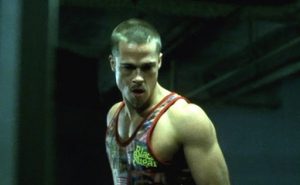 Back in 2014, the tabloids were going crazy over fact that Brad Pitt and Angelina Jolie had started training in this “military-style, unarmed combat”. They of course meant Krav Maga. It was reported that Pitt had been intensively training in Krav Maga in order to gain muscle mass and lose weight for the film By The Sea (2015). Training several days a week, Pitt allegedly lost over 10-pounds for the role. Already a seasoned action actor, he was reported to be mainly using Krav for its effective body conditioning benefits.

Daniel Craig was lauded for bringing a far grittier element to the James Bond character role. In many ways he was a revelation, following the pompousness of precursors like Pierce Bronson and Roger Moore with a cold exterior and brutal fighting stye. To help him prepare for Casino Royale (2006), he trained with Krav Maga Worldwide founder Darren Levine who says he not only helped Craig (amongst other actors) develop the necessary skills for the role but also gain muscle mass and increase fitness levels: “Their shoulders are ripped, their core is defined, and their legs get really muscular,” he said of the actors after he worked with them.

Angelina Jolie became aware of Krav Maga when she was training for her role in Tomb Raider (2001). She started learning Krav Maga in earnest alongside Brad Pitt in 2014, training for 45 minutes a day with fantastic fitness benefits.

In the film Enough (2002), Jennifer Lopez plays a beaten down wife and mother who escapes the clutches of her abusive husband, trains in Krav Maga in order to fight back and save her daughter. She trained extensively in Krav before the film, learning the ins and outs for her character role, and to get in shape for filming. Speaking openly about the benefits of the system, Lopez expressed her conviction for its use in empowering women. “[Krav Maga] levels out the playing field between men and women…Where it doesn’t matter how big or tall or strong you are. You can actually manoeuvre around that. It’s about getting out of the way, counter attacking and using whatever you can to get the upper hand.”

Mission Impossible, James Bond – Krav Maga has made its way into all the action classic’s training repertoires. Tom Cruise has trained in Krav Maga for use in quite a few action roles, including Ethan Hunt in Mission Impossible: Ghost Protocol (2011) and Vincent in Collateral (2004). You can watch Cruise employ textbook Krav Maga techniques quite clearly in Collateral, including one scene where Vincent disarms a baton-wielding bodyguard, responding with a disarming counterattack.

Jessica Chastain is another female advocate for the empowering properties of Krav Maga. She trained heavily in the system for The Debt (2010) and had only praise for its benefits: “I became kind of obsessed with it. I had four months of training before, and before that I never really thought about myself as a fighter. What I was told, it’s not necessarily simple to learn, but in my very first session they said, Krav Maga is about taking out your opponent as quickly as possible. It’s about someone coming at you with a gun or a knife and being able to disarm that person ensuring your ability to go home safe.”

Sean Penn trained extensively in Krav for the 2015 film The Gunman, favouring it because, in his words, “Krav Maga is not a sport – it’s meant to neutralize and disarm.” Stunt coordinator for the film, Markos Rounthwaite, chose it as the method of choice for the film due its realistic techniques, and because Penn has already been learning it for years.

Krav Maga Worldwide’s Darren Levine was also employed to train Leonard DiCaprio for his role in Blood Diamond (2012), mainly to get DiCaprio in shape, but also to assist him with his method acting to perform highly realistic action scenes: “We trained Leonardo DiCaprio for Blood Diamond. He was out of shape when he first came to us, and he left rock-solid…Directors are coming to us because they want realistic fight scenes.”

Whether you’re an actor, an athlete, man, woman or child, Krav Maga is an extremely effective way to get fit, improve strength, and develop real-life self-defence techniques. If you’d like to give it a try contact SGS Krav Maga today. We have a wide range of classes to choose from and our qualified instructors will be more than happy to get you started.