The KMG method for dealing with multiple attackers is based on military, law enforcement and civilian confrontations. 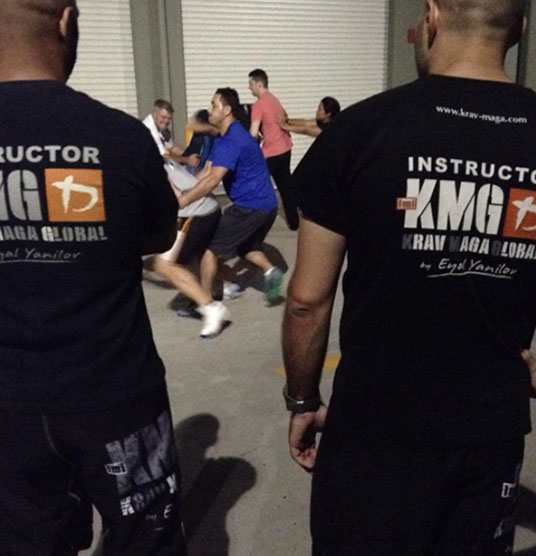 In the 60′s and 70′s curriculum (for civilians) we only dealt with a situation where two people grab your hands, and maybe a third attacker from the front. In the early 80′s we had self-defense techniques against
two attackers, one with a stick the other with a knife and how to handle the situation (evaluation, positioning, technical solutions); In the mid 80′s we added games of 4 Vs. 1 and after that from the early 90′s we started dealing with all kinds of attacks and problems in all types of environments. Finally, in the late 90′s and early 21st century we improved the tactics and added them to our overall method.

First, here are some basic facts about multiple attacker situations…

The strategy Krav Maga Global offers for dealing with a multiple attacker situation is divided in to three periods – before, during and after the fight:

Pre-fight (before the actual physical attack)

Always try to avoid, prevent and de-escalate the attack. Use actions and tactical maneuvers such as – escaping or distancing to get away from the danger zone; re-position to be facing all opponents and avoid encircling (attacker that reaches the back side of defender); preemptive attacks; equipping self with a common object that will help deterring, threatening as well as allow better defensive and counter actions; recruiting assistance (from other people); using voice and threats, and more.

Mainly utilization of specific maneuvers targeted to position defender in such a way that all of the attackers are “funneled” in-front of the defender. This is done while performing the needed moves, defenses, attacks and counter attacks.

Additional tactics and techniques to ensure the attackers won’t reach, encircle or use tools against the defender. This includes maneuvers, control techniques, manipulation of body position (self and attackers), retrieving of tools and weapons, and more.

How exactly can this be done?

Good question. From easy to slightly more complicated, we use methods that improve the ability to divide and spread attention, elevate aggression and determination as well as making the right decision while under stress and bombarded with data. The methods include:

In KMG training against multiple attackers, scenario variations are vital, especially but not only, changing locations and terrains for the training and practice.

In regards to weapons, we recommend that students get one during a conflict, since the attackers usually do carry. We teach how to identify and retrieve objects and defend or attack with them (originally a common object that becomes an improvised tool/weapon for self-defense). Mainly we teach how to use the tools in order to threaten and control others. The common objects are divided into different categories: shield like; stone like; sharp edge objects; stick like; small object (for distraction);rope and whip like – we teach how to use all of them.

There are many common mistakes I see in martial arts schools when training against multiple attackers, most of them are related to not keeping it real, mainly the attackers fail to function as in real life situations. The attackers have a tendency to cooperate with defenders and time their attacks to the convenience of the defender. Also, there are many training situations in which the defender knows exactly what the attacker is going to do and when. This is by no doubt far from most real life surprise attacks.

Remember – the attacking partner is the teacher.

Without the existence of a “good problem” one can never even understand reality.

My friends, the above is really in a nutshell, reading about it is great but won’t do the trick. In order to be able to defend against multiple attackers you need training. It is essential you experience being in the eye of the storm, in the middle of the trouble, in order to feel, experience, overcome and become better and efficient. But, we start easy with the appropriate training and escalate and progress with them in time.
That’s about it for now. Don’t forget to train hard and keep it real, but most of all safe for you and your partners with the correct attitude, protection gear and equipment.