My first foray into Krav Maga was in 2020, straight after lockdown restrictions were lifted. I had been doing my best to stay fit and healthy throughout the restrictions and was looking for something that was going to keep me fit and challenge me mentally.

The first Krav Maga school I tried out, did not seem professional at all. Instructors seemed to not know what they were talking about and there was definitely an air of arrogance in the room. I decided to give Krav Maga another shot and found that SGS Krav Maga was local to me and a certified KMG school. SGS Krav Maga, has essentially become like a second home to me. I am indebted to SGS and its team of knowledgeable, skilled, and hilarious instructors for helping to shape me into a more confident and capable person.

While having such top-notch teachers is crucial to your experience, it’s ultimately the system itself that will transform you — physically, mentally, and even spiritually. Here are all the reasons I’m obsessed with Krav Maga and why you should be too.

Given that the system was originally developed for the Israeli armed forces, you know it has to be pretty effective. Krav Maga means “contact combat” in Hebrew, and that’s exactly what it is. Developed by Imi Lichtenfeld in the 1940s, when the Israeli Defense Forces were concurrently forming, Krav Maga was designed to be yet another weapon in a soldier’s arsenal. In other words, your body is a weapon, and it can defend against anything, including guns and knives.

Since then, the system has been adapted for law enforcement and civilian use, but the fundamental principles remain the same. Some of the most important principles for civilian practitioners include defend and counterattack simultaneously, be as aggressive as possible, and don’t get hurt.

To put it even more simply: you’re fighting for your life. Even though it’s known as a self-defense system, Krav Maga practitioners must also learn fundamental fighting skills — how to properly punch, elbow, kick, etc. It’s as much an offense system as it is a defense system.

However, what is perhaps paramount above all else, for SGS Krav Maga and any true Krav Maga school, is safety in training. Yes, students are encouraged to display explosive aggression and are being “attacked” constantly, but the system was also designed for its practitioners to train without getting hurt. And not getting hurt is Krav Maga’s primary goal.

What distinguishes Krav Maga from other martial arts is how realistic and practical it is. The confrontations we deal with in class mirror the real world — muggings, sexual assault, bar fights, etc. — not controlled scenarios that involve another martial arts practitioner and a matted arena. That’s also why Krav Maga is not a competitive martial art, like Muay Thai or jujitsu, because the techniques are designed to inflict maximum damage. However, that’s also what makes it so effective. 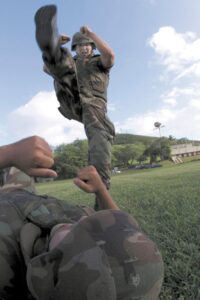 To truly simulate real-life threats, we often practice stress drills in class, which can entail a circle of people pushing into you with punch pads and screaming in your ear or surprise attackers trying to stab you at unexpected times. Sometimes we simply spin around 10 times before performing a defence. These drills are designed to exhaust our bodies and disorient our senses so that we can practice the techniques under stress. In real life, your attacker is not going to wait for you to get in position before launching an assault, so you better be prepared to fight back under unideal circumstances.

This is expanded on with combat suits, used by the instructors to allow students to stress test techniques at full power and aggression. A strong focus is also on fighting, with regular sparring classes for the students.

Anyone Can Learn It

The beauty of Krav Maga is that it’s designed for anyone and everyone to learn. It doesn’t matter if you’re 6’4″ and 145kg or 5’3″ and 50kg. I’ve had the privilege of chatting with Tommy Blom, Master Level 1  instructor of Krav Maga Global, one of the highest ranked instructors in the world, who told me, “One thing that instructors must always remember — Krav Maga is a system for everyone. And just because you have the physical ability to do something, it’s not Krav Maga if only 10 percent of your students are also able to do it. Krav Maga is for everybody.”

In fact, one way to think of Krav Maga is that it’s the great equalizer. The system’s techniques allow the 50kg girl to neutralize the 145kg guy by focusing on the attacker’s vulnerable points. And you don’t need any prior martial arts experience to become proficient.

If your body is a weapon, then you’ll want to make that weapon as strong as possible. Think of Krav Maga as the metalsmith who not only forges the sword and shield but also fortifies it to make it as lethal as possible. (You are the sword and shield, in case that wasn’t clear.) In every class, we have a warmup, power drills, and exercises that combine cardio and strength training at intense intervals. So not only are you learning the techniques that will help save your life, but you’re also conditioning your body to carry out those techniques more effectively and last longer in a fight.

It Will Help You in Other Areas of Life

It’s only natural that once you’ve gained some physical confidence, that confidence will carry over into other areas of your life. Developing mental resolve in handling hypothetically threatening situations, strengthening your muscles with strikes and power drills, and gaining a better understanding of your body and its instincts are all working toward optimizing you as a whole, and you’ll notice the benefits extending far beyond class.

I asked Steven Kratsas, Head Instructor of SGS Krav Maga and the first instructor I met at the school, for his insight on this. Kratsas said, “The interesting thing is that we did a survey on this about three years ago. We asked our students what they felt were the benefits of their training at SGS Krav Maga. We were expecting them all to say weight loss or being fitter, or ‘the self-defense and fighting skills saved me and my friends or something. They actually didn’t focus on those aspects at all. By far the most common response to the question was boosting self-confidence.”

How exactly does getting attacked over and over again boost one’s self-confidence?

“The training changes people’s psychological patterns and opinions of themselves, others, and life in general,” Kratsas said. “Strange things happen when you realize you are capable of a lot more than you thought.” 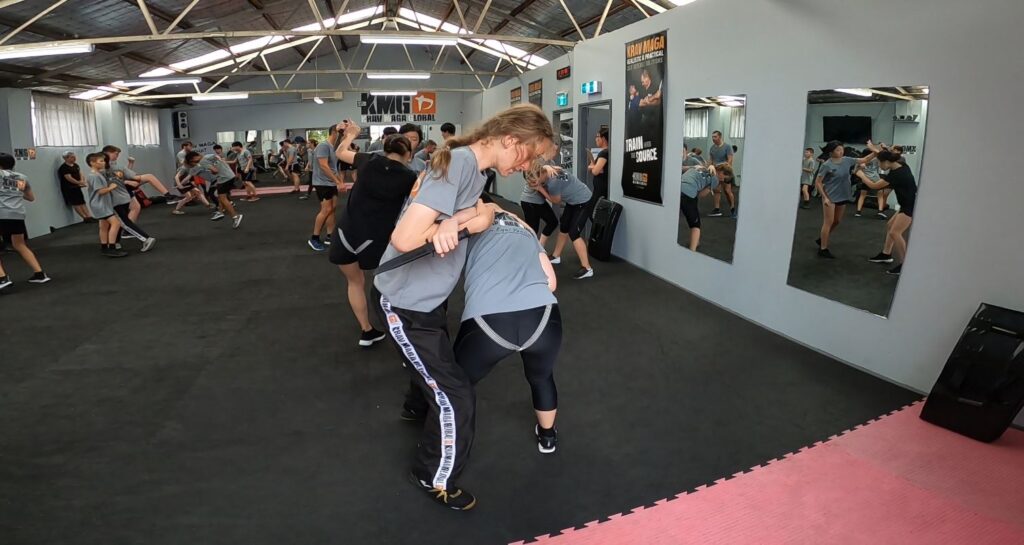 Indeed, Krav Maga is like a doorway into a new part of yourself. Once that doorway’s been cracked, the rest of you comes flooding through and suddenly you feel like you can accomplish anything.

“The Krav Maga Global mindset helps people start believing in themselves, and this can make a huge difference in someone’s life,” Kratsas continued. “Students can easily translate their success in training to succeed in their lives.”

You Will Make Life-Long Friends

Besides learning invaluable self-defence skills, you’ll also be experiencing an unparalleled kind of camaraderie in class. Nothing brings people closer like going through physical and mental hell together for the sake of self-improvement. Everyone is supportive and positive in class. It’s kind of hard to be a jerk when you’re getting kicked in the groin. And if you can get past beating each other up, you can probably get past anything.

Over the past year, I’ve made friends with people from all walks of life, of all ages and backgrounds — financial analysts, scientists, nurses, doctors, soldiers, police, firemen, teachers etc. These are people I normally wouldn’t meet and get to know in my normal life, but after taking turns putting each other in headlocks and blood chokes, you kind of become great friends. 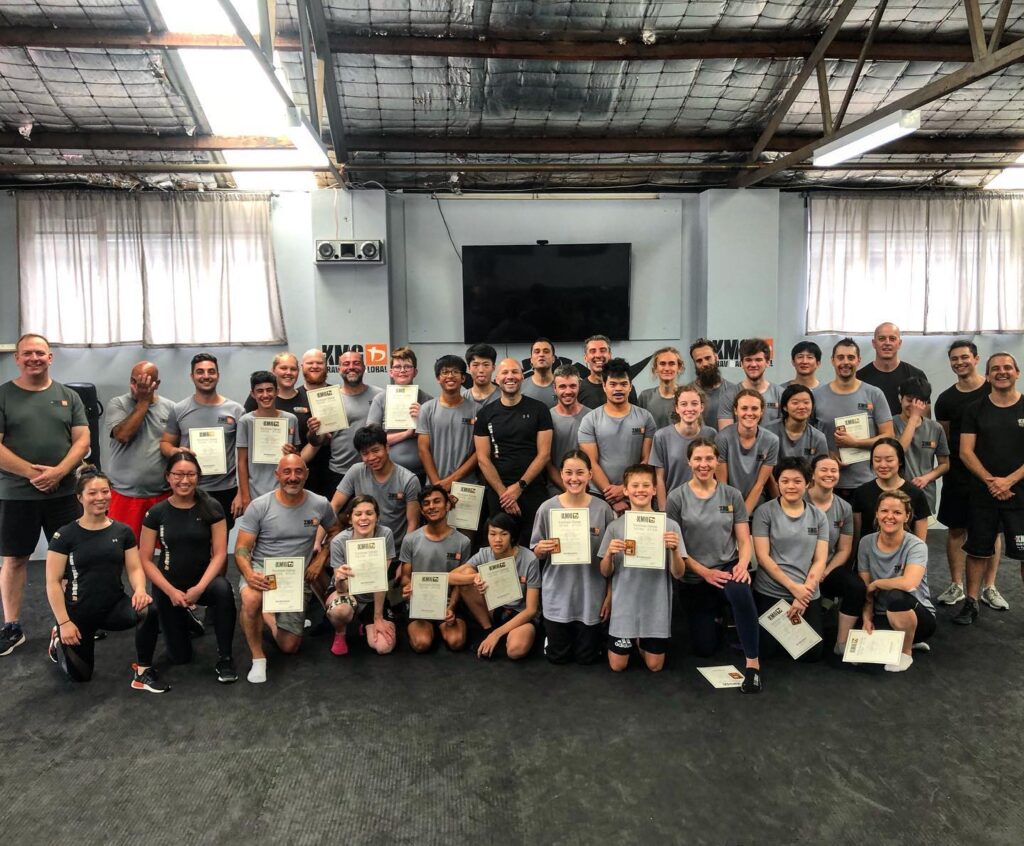 And there’s honestly no bonding experience like an SGS Krav Maga grading. A grading determines if you’re ready to go up a level in rank, in KMG these are used as a personal journey for the student rather than bragging rights. These are grueling day-long tests that combine technical, tactical, physical, and mental exercise drills, “Intense” is an absurd understatement. But when you’re drenched in sweat and on the verge of vomiting and you look around you at everyone else going through the same thing, and when your testing partner puts their hand on your shoulder and says, “You got this,” you feel like you would do anything for these people.

My fellow classmates are more than just the people who train next to me at the gym after work; they’re my family.

It Can Save Your Life

In case this hasn’t been emphasized enough, Krav Maga can save your life. As Steven Kratsas always says, it prepares you for the worst day of your life which hopefully never comes. And if you happened to have applied for a law enforcement/ military/ intelligence agency and they decide to finally call you back, well, Krav Maga will come in handy then too.