Share on facebook
Share on twitter
Share on linkedin
Krav Maga has a lot of techniques that all follow principles. Once you’ve mastered all of them, the key is to understand those principles to be able to adapt to any situation and not to bound yourself to what you learn in class. If you had the chance to practice Krav Maga for a few years now, this list of human weak points will not be unknown to you. 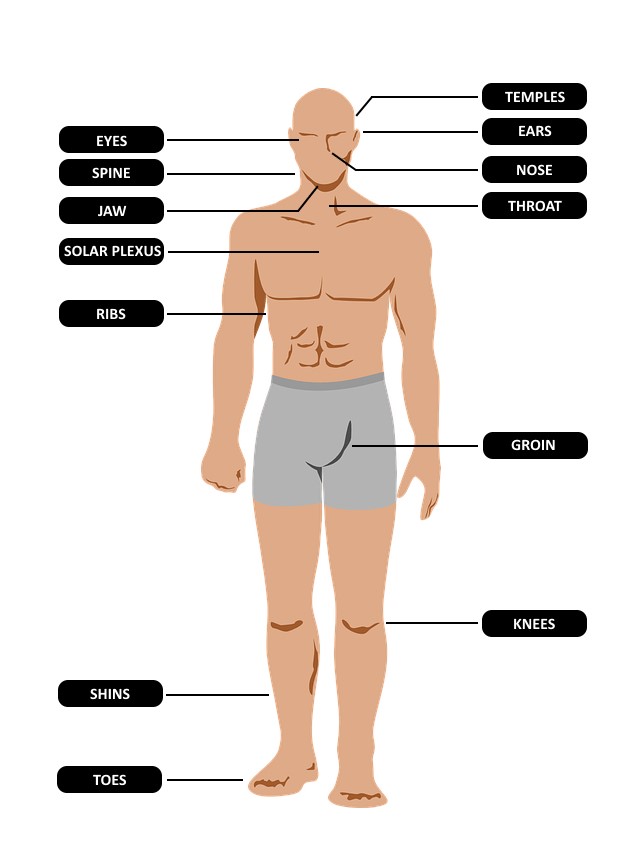 The eyes of your opponent should be one of the primary targets you want to reach for two reasons. First of all, they are relatively easy to reach with a punch during a standing fight or by poking with your fingers if you are on the ground or being choked. And the second reason is that if you manage to successfully hurt your aggressor in the eyes it may incapacitate him by making him blind. And it also hurts like hell. It is not a punch that would the most effective but a poke into the eyes with your fingers extended.

Your nose is a central, unprotected piece of your face. That makes it vulnerable to impacts. A broken nose is a fracture of the nasal bone and nearby cartilage. A light fracture can be painless, and only the deformity of the nose will signal the fracture. A severe impact will shift the nose out of its normal position, cause severe nose bleeding, and deviate the septum which will impact the airflow. Palm strikes are very efficient to do so.

The temples located on the two sides of your head. At this position, the skull is thinner than the rest making the area more vulnerable. Under the skull in the same region, run arteries which provide the brain in blood. A severe hit can lead to excessive pressure on the brain and oxygen deprivation. If no medical care is given in a short delay, irreversible damage can be done to the brain. The most common symptoms are disorientation and loss of consciousness. The best way to hit the temple would be with a hook punch, open palm strike, elbow strike, or a round kick to the head if you’re able to do so.

STRIKES TO THE EARS

Palm strikes to the ears can provoke a partial loss of hearing. The person will either see his ability to hear reduce or he will hear parasite sounds like ringing, swooshing, or hissing. If the impact is hard enough, you can tear the eardrum or dislocate the ossicles. This will result in a total loss of hearing. Any of these consequences will put you in an advantageous situation. Same as the temple, the best strikes to target the ears are the hooks and high-kicks.

PUNCH TO THE THROAT

You want to disrupt the throat of your opponent with a straight punch right into it. You will block his breathing and he will gasp for air. The more power the more destructive it will be, it is as simple as that. An educational block is also recommended for its efficiency but more difficult to perform.

It is commonly known that a punch to the jaw can easily knock out. But why? When you hit the side of the jaw, where it is attached to the rest of the skull, it makes the head spin around. Then your muscles, tendons, and bones will make it stop. As you understand there’s a quick acceleration followed by sudden deceleration. But the brain is contained in a fluid. Nothing is maintaining it still. So instead of decelerating like the rest of your head, the brain will crash against the inside part of your skull causing brain damage, and often a knockout of you punch hard enough.

Located between the chest and the nombril, receiving a hit on the solar plexus is really painful and might stop your attacker from breathing for a few seconds. This effect is amplified you hit him while he is breathing in. The few seconds where he won’t be able to breathe will give you the opportunity to step in and throw a series of attacks. Also, the chest is not as hard as the solar plexus is for your hand. By doing so you diminish the chances of breaking your knuckles. Palm strikes, punches, and defensive kicks are very effective against the solar plexus.

A punch or a kick to the side of the body will provoke a lot of pain and may even incapacitate one of his arms.

The spine is a vital part of your body. The cord passing through the spine allows your brain to communicate with the rest of your body. No surprise how important it is. If you choose to attack the spine of your aggressor you choose to hurt him bad. Attack on the back of the neck with an elbow strike, and there will be a chance that you paralyze him. Or it can be way worse, it can result in death.

Probably the most famous target in self-defence. A kick in the groin is an easy task to do. Located at the center of the body, the most effective way to protect it is by turning your hips. Having adequate reflexes is really difficult when you are not used to it. One of the big advantages of the groin is that you don’t need to hit really hard to hurt someone. Even a slight kick well done can do a lot of damage. Often being stricken in the groin will surprise the person and scare him, even you don’t touch the person. In a standing position, a kick is the most effective way to strike the groin, but in-ground fighting, use your palms to strike it and get out of the situation.

Someone moving a lot a harder to beat. Target his legs in order to slow him down. If you can strike him in the knees this could be a good strategy. With sufficient strength and precision, you can dislocate his joints with a round kick. It is better if his weight is on the knee your attacking. You can also hit the kneecap with a direct kick.

The front part of your shin is full of nerves and there’s no flesh to protect it. That’s why it is so hurtful to bump into the table’s leg. You will often see Muay Thai fighter trying to eliminate those sensors in order to be able to block kicks with their shin without feeling any pain. Fortunately, most of the people are not Muay Thai fighters. A kick to the shin is quick, painful, and may be a distracting attack before a power punch.

Crushing the toes can be very effective especially if he is grabbing you from behind.

Of course, it is one thing to read all these zones and another thing to actually train these on a regular basis as part of your training regime. Keep up the training, and stay safe.